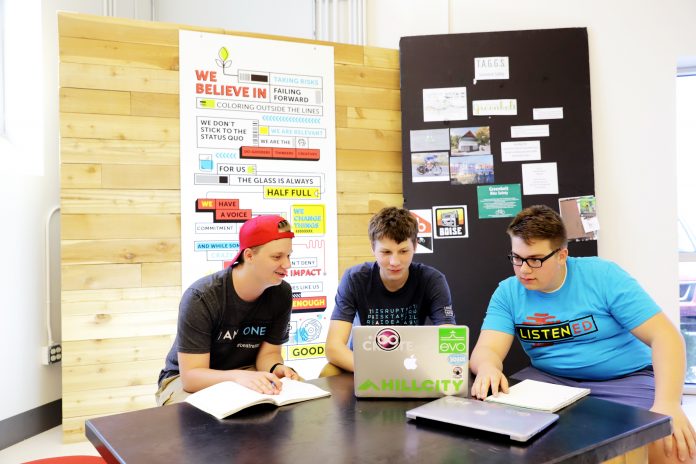 Raising awareness of greenbelt cyclist safety
By Alec Batten
Photography by Kimberlee Miller
The Boise Greenbelt is a jewel of the Boise community. The 36-mile walking-and-biking path in the Treasure Valley both conserves the natural beauty of the outdoors and creates community, bringing people together like few other places can. But like any community gathering place, it also has its problems.
I am a student at One Stone, an independent, student-led high school in downtown Boise, focused on making students better leaders and the world a better place. I’d like to raise awareness of cyclist etiquette within the greater Boise metropolitan area, starting with the Greenbelt.
One Stone’s flagship program, Design Lab (DLab), uses Stanford’s School Design Thinking process to solve problems using human-centered design. Because it’s such a central piece of Boise culture, my team chose to make the Greenbelt a safer place. To identify the biggest problems on the Greenbelt, our team observed and talked to the users of the Greenbelt.
During our observations along the walkway, my team saw the majority of the cyclists on the Greenbelt pass pedestrians without an audible signal. We also met with a Greenbelt volunteer, and through this interview, we narrowed down the most dangerous combination of behavior on the Greenbelt: unaware pedestrians and uneducated cyclists.
When interviewed, Kristin Armstrong, a former Olympian cyclist, stated that she thinks the smartest way to cycle is to “only have one earbud in [her] ear,” in order to minimize distraction while riding. She also noted that distractions such as cell phones often interfere with cyclist and pedestrian safety.
From 2007 to 2016, there was a 27-percent increase in the number of pedestrian-related accidents. Being free from motorized vehicles, the Greenbelt is a hub for pedestrian traffic, and significantly helps reduce this risk. However, there is still etiquette that should be followed to reduce the risk of injury on the Greenbelt.

To help build awareness for cycling safety on the Greenbelt, we’ve created a website Greenbeltsafety.com that includes resources such as Always use loud audible signals, i.e. “On your left!” for pedestrians when attempting to pass them on the left, Yield at intersections (pedestrians always have the right of way), and Be aware of your surroundings and reduce distractions (use only one earbud).
We have also reached out to Radio Boise (89.9/93.5) to contact them about a Public Service Announcement that would inform the users of the Greenbelt about the different dangers of improper bike etiquette. Please visit and share our website to generate awareness of proper bike etiquette on Boise’s Greenbelt.