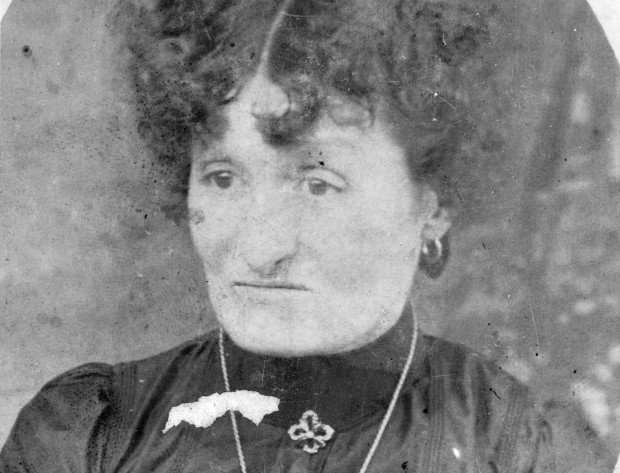 The discovery of gold on the Feather River in 1863 prompted thousands of people to move to the area, including five year old Felicia Ann, her father Stephen McIntyre, his wife, and his son. Born on September 13, 1858 in Van Buren County Iowa, Annie arrived in Rocky Bar, Idaho on Independence Day of 1864, perched on her father’s shoulders. She attended school in Rocky Bar until the age of 14. Her father Stephen McIntyre eventually became part owner of the Golden Star Mine, but was tragically shot in a street fight, leaving Annie on her own. She became a child bride at 17, marrying a man sixteen years older than she named Thomas Morrow on August 27, 1876. Morrow was reportedly a cruel husband, and she later filed for divorce. Morrow died in 1906 and is buried in Morris Hill Cemetery Plot: MHILL_4_48_9. Before they separated, they had five children: Eliza Anne Morrow,John William Morrow, Harry Morrow, Susan Margaret Morrow, and Ethel Frances Morrow.

During the gold rush, Annie owned “houses of entertainment” in the “gold-boom” towns of Atlanta and Rocky Bar, Idaho. Annie was an incredible entrepenuer, described as one of Atlanta’s more colorful individuals. She owned a plethora of businesses, and many mining claims. Despite her success, she also worked as a successful “lady of the night”.

In May 1896, Annie and a companion, Emma von Losch AKA “Dutch Em,” another “soiled dove,” set out on foot from Atlanta to Rocky Bar. It was an eight mile trip along James Creek Summit pass, a major transportation route, and the pair were caught in a terrible late snowstorm. The blizzard raged on for two days. The women walked together on crusted snow, but at a crawl. After they failed to show up in Rocky Bar when expected, a search party was formed. Annie was found crawling through snow on her hands and knees, incoherent. “Dutch Em” was found dead, covered by Annie’s underclothes. Annie’s feet were frostbitten and had to be amputated above the ankles, garnering her the nickname “Peg Leg Annie”.

“Peg Leg Annie” lived at Rocky Bar in a cabin, which still stands. One of her many business ventures was selling whiskey. To prevent her customers from walking off with product, hid the bottles along the side of a building by her cabin. She collected payment in advance, then, with a shotgun across her knees, she would direct her customers to the spot where the bottles of booze were hidden.

A memorial plaque erected by the Atlanta Arts Society in July of 2003 at James Creek Summit pass reads, “Dedicated to the gritty resolve and courage of Annie Morrow, AKA ‘Peg Leg Annie’, and her friend ‘Dutch Em.’ In May 1896 they were caught in a late blizzard while walking from Atlanta to Rocky Bar. Losing their direction to the Summit House at this site, Em froze to death and Annie’s feet were later amputated. She died in 1934, but their colorful spirit lives on in our hearts and minds through the stories, myths and truth, still told about these pioneer women.”

If you would like to visit “Peg Leg Annie” at her gravesite, you can find her in the Morris Hill Cemetery, Plot: Section 4-48-8. She has a simple gravestone, and she died on her birthday in 1934. She impacted Idaho greatly; a restaurant in Boise was even named after her, although it was later sold in 1997.

If you are interested in reading more about Atlanta or Rock Bar, see Ghost Towns of Idaho, by Donald C. Miller or Idaho Echoes in Time, by R.G. Robertson.