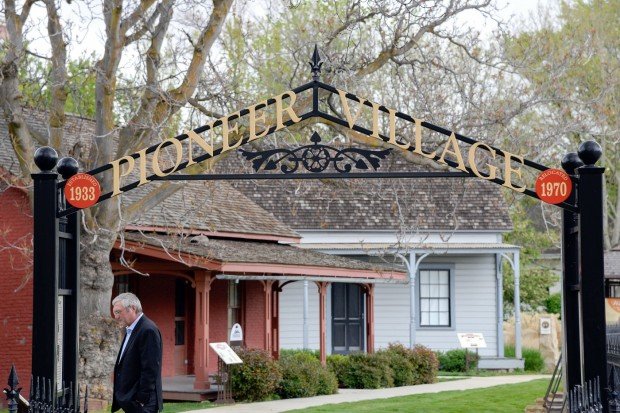 Story and Photography by Ken Levy

Travel back to the days of Lewis and Clark in a self-guided tour through history at Pioneer Village next to the Idaho State Historical Museum at Julia Davis Park.

Situated near the Boise River Greenbelt, the village is newly renovated and landscaped. What once was a field of goathead weeds now features graceful, flowing pathways, ancient homes, an exhibit of historic Boise and a landscaped pavilion.

Among its many attractions are three buildings that were homes to prominent citizens from Idaho’s territorial days.

There are interpretive signs throughout, and a kiosk at the Lewis and Clark exhibit offers a wealth of activities, according to Anne Schorzman, events coordinator for the Idaho State Historical Museum.

Pioneer Village was founded in 1933, when the Sons and Daughters of the Idaho Pioneers moved two 1860s-era log cabins to Julia Davis Park.  They were restored, and new buildings added, but they suffered from neglect and vandalism over time.

In the early 1970s, the buildings were moved next to the museum along with the Mayor Thomas Logan House.

The Adelmann House — which now often serves as a classroom — was also relocated to Pioneer Village.

The pavilion features massive beams held together without a single nail. Its surroundings are beautifully landscaped, and life-sized interpretive banners teach about members of the Lewis and Clark expedition’s Corps of Discovery.

Get a detailed glimpse of the history of Boise in the 1865 Logan House exhibit, “Boise: A History of Our Capital City.”

According to the Idaho State Historical Society, early fur trappers described this area as a wooded valley and the name “Boise” comes from the French word for woods.

Thousands of Oregon Trail emigrants passed through the area with little thought of settling here. Discover what drew a handful of people in the 1860s to lay the foundation of the thriving, vibrant community of today.

You’ll view a three-dimensional image of Main Street through a stereoscope, ring a trolley bell and see how some Boise locations looked back in the pioneer days, compared with now.

Take a stroll along the beautiful Lewis and Clark Discovery Trail at the east end of the village. This is where the Voyage of Discovery of 1804-1806 comes to life with hands-on activities that teach about the science of the voyage.

A navigation activity challenges visitors to locate animals, plants, geology and other items native to the area. Find the explorer’s secret cache and win a prize.

As you follow the trail, you’ll encounter special groupings of plants, animal tracks and rock formations that will draw you through the activities, sculptures and rock formations, and information panels sure to inspire and enlighten you to one of the most famous eras of regional history.

The village was rededicated in 2010, Schorzman said.

“It’s fun to get it reopened to the public with good safety (features),” she said. “It’s finally come into its own.”

This is not just an old-building graveyard. It’s a fun and educational experience for all.