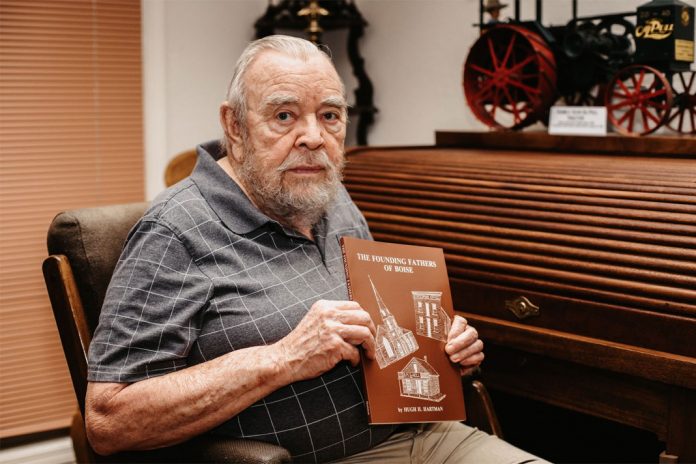 Hugh Hartman began writing Idaho history 60 years ago, and at 89, continues to tell the stories of the state’s earliest settlers

The next time you stroll downtown Boise sidewalks or through the valley’s residential and commercial pockets, try this: Peel back the modern-day layers of this ever-growing city to wander way back in time.

Search for bits of deep history. Find Boise’s original bones and birthmarks. Uncover the handiwork of hard-working homesteaders who called this place home 150 years ago.

For Hugh Hartman, whose great-grandchildren are seventh-generation Idahoans, viewing the landscape around him with a what-once-was lens is altogether natural.

“I started doing genealogy at 9, about 80 years ago, and started writing history 60 years or so ago,” said Hartman, who has added more than 18,000 people to his lineage traced back far before his Idaho roots to the mid-1300s and who continues to research and write about Idaho history. “My family has been here since ’83 – and by that, I mean 1883. In fact, I only live about a mile from where my great grand-dad homesteaded.”

Mindfully putting fingertips to two typewriters in the late 1980s for five years before sending his work to print, Hartman published, “The Founding Fathers of Boise, 1863-1875” to, as the preface reads, “tell of the hardships, of the togetherness, of the gaiety, of the bravery and everyday living of these proud pioneers.”

Over many decades, the 148-page book that features dozens of original hand-sketched Hartman illustrations and more than 80 biographies of Boise’s earliest settlers made its way into schoolrooms, history museums and in the hands of thousands of people all over the world.

“You wouldn’t believe what I’ve dug out, like John McClellan, the first one to bring chickens to Boise. Dr. Thompson, who was my mother’s twin sister’s father-in-law’s father,” he said quickly once and slowly the second time, understanding the comical complexity, “was the first doctor in Boise. I think readers appreciate it because it’s so detailed. It’s not a fancy romance novel, that’s for sure.”

Yet you can find stories of love.

“A family came through headed to Oregon, and their 21-year-old daughter had typhoid fever,” Hartman said. “They figured she’d be dead in two days. They left her with Dr. Thompson and headed west. Dr. Thompson brought her back to health and ended up marrying her and had six children, so there’s good-ole’ true-to-life stories in there. And sometimes people would come through.”

This all happened a stone’s throw from today’s Payette Brewing on River Street.

Approaching 90 in 2021 – “I’m about 30 years or so younger than Idaho,” he says – his historical story-telling gumption rolls on.

Hartman said, “I’m writing the history of Barber, Idaho,” a place now known by locals as a popular tubing put-in site along the Boise River. “Barber, Idaho, was a mill town. There was a lumber mill. I had an uncle who worked in the general store. I had an uncle who was a pond monkey; he used to run across the logs in the pond to direct them and never got wet. Another uncle furnished the meat for the store.”

Next time you wander, put on Hugh-colored glasses to discover Boise in its infancy hiding in plain sight. Don’t overlook names of popular arteries like Curtis Road, Ridenbaugh Street and Morris Hill named after early residents. When struck by the beauty of Warm Springs homes, search for stone hitching posts still firmly planted in the yards, but don’t forget that the earliest settlers made homes in caves and thatch huts.

Explore Boise with a new, “old” lens, and when what you see leaves you curious, ask Hartman and his son who moderate the Facebook Group, “History of Boise, Idaho, from 1863,” which currently boasts more than 17,000 followers, a number that grows daily.

“I had someone this morning who wanted to know about Thomas Maxwell,” Hartman said. “Well, I found him.”

Of course you did, Hugh Hartman. And we can’t wait to hear all about it.

A Place for Readers and Writers