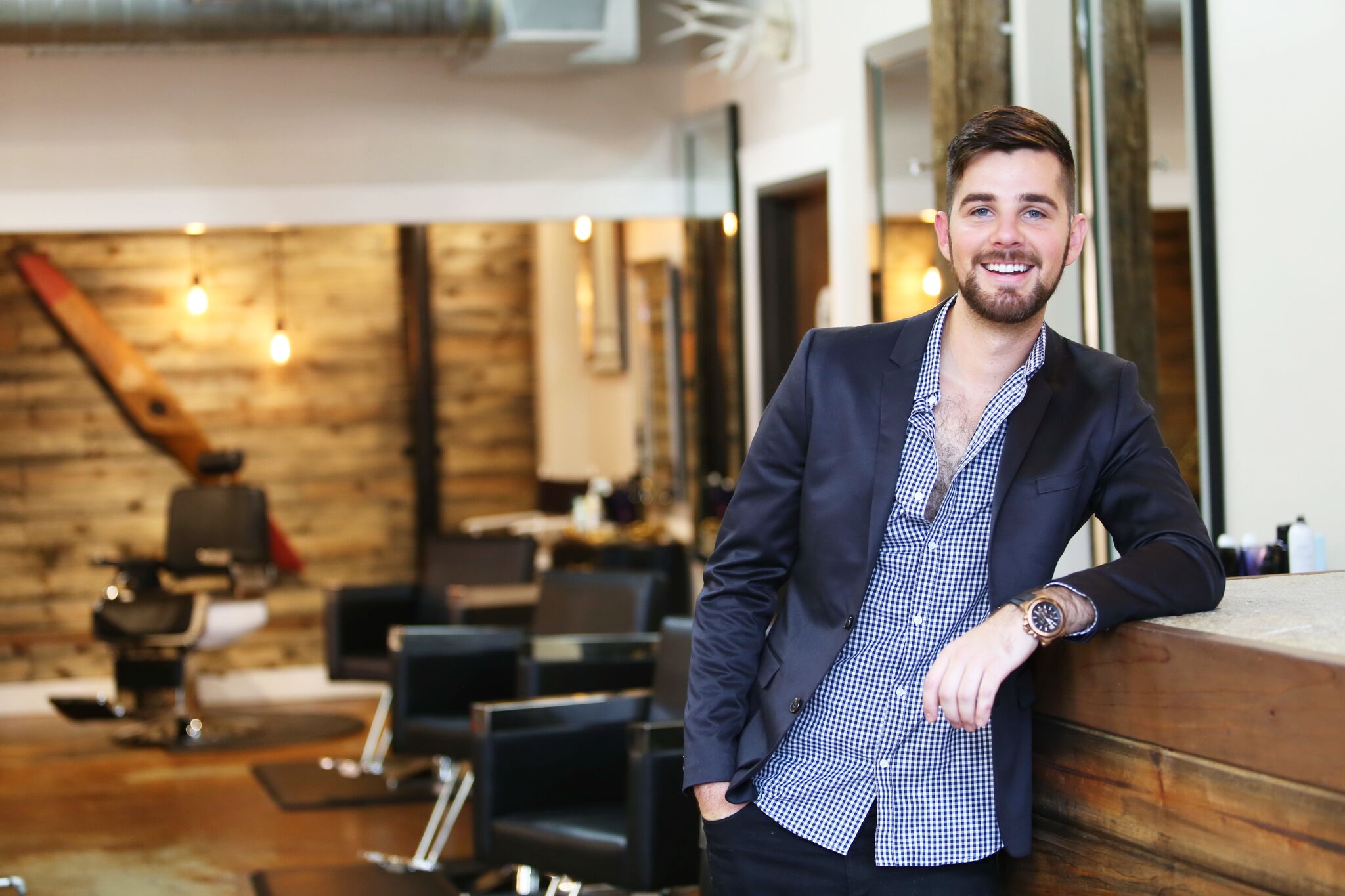 A virtual feast for the eyes, but this salon is not just another pretty face, it’s all about collaboration and service.

Located on the east side of Boise in Bown Crossing, once you enter, you know that you have arrived somewhere special. The soaring ceilings with exposed duct work, stained cement floors, and piping disguised as fixtures in the bathroom, provide an industrial but warm feeling. Throughout the space are playful baubles, imaginative trinkets, and an eclectic mix of finishing touches. The floor-to-ceiling shelving suspended by thick rope is where a picture of Martha Stewart is strategically placed to oversee the whole operation. The pièce de résistance though, is the two-tiered chandelier, dripping in crystals, that was brought back from

Bath, England in a backpack by owner, Cole Lasher. Directly underneath the centerpiece, fit for royalty, sits a round champagne-colored velvet sofa with a pedestal back, something you might see in a chateau in Versailles.

The makeup room is a delightful surprise as well; it’s an unexpected and glamorous room with a multitude of mirrors illuminated by Edison bulb pendants varying in size. Among services like haircuts, coloring, waxing, and keratin treatments, they also offer custom makeup consultation that teach you how to apply makeup according to your skin type and needs. Alternatively, you can opt for having your makeup applied or treat your bridal party to hair and makeup services for the big day.

The Collab isn’t Cole Lasher’s first creation, he is the co-owner of a Temecula, California based salon, named Salon de la Mariee’ which is French for ‘Salon of the Bride.’ The salon was born after a life-changing experience in the Parisian Subway where Cole narrowly escaped an attack. Upon returning from his travels, he followed his heart and opened his first salon.
“Once my first salon was thriving I knew that I wanted to return to Boise. When I was going to college at BSU, I told myself that if I were to open a business here that I would want it to be in Bown Crossing. I felt connected to Boise and the community here. My parents live here, and I always knew I would return.”

As luck would have it, while visiting his parents a year and half ago, he learned this space was available, and thus his dream of retuning to Boise and setting down his roots became a reality.

The salon officially opened a year ago and to ensure that his salon stands apart from the rest, Cole emphasizes the importance of having a cohesive team with the same vision of creating an environment that provides top-notch service for their clients. The idea that he can bring together talent working to collaborate with the same goal in mind, was how the salon name was born.

“For me it is more than just a hair salon, it was also about getting people together who love what they do,” Cole notes. “We are a team who work hard to ensure that our clients feel good about themselves and the service they receive. We want people to have a great experience.”

I Think I’m Falling For You