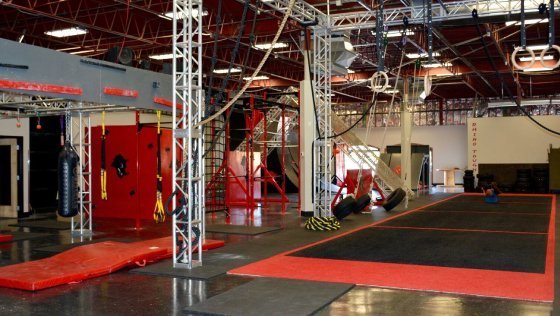 Camp Rhino Finds Ways to Make You Want to Work

If you’re anything like most Americans, myself included, you’ve joined and cancelled more gym memberships than you can recall. Each time you attempt to pop in for a workout, several excuses prevent you from going. With three young children at home, I jump on the excuse bandwagon nearly every day. My bed never feels better than at 5:45 am when my “Go Workout” alarm sounds for the fifth time.

The typical run-of-the-mill gym offers a standard set of equipment in a sterile atmosphere, and I’m uninspired from the moment I walk in. While some are capable of individually creating and sticking to a workout plan, I most certainly am not one of them!

I’ve often wished that someone would start a fitness facility that feels more like playing than working. Enter Jenn Arnold, a former Las Vegas resident who brought her gym with her when she moved to Boise. What began as an outdoor boot camp program in Las Vegas parks, later developed into a fullfledged gym called Camp Rhino. When Jenn moved to town, she was insistent upon her gym coming with her and was able to convince the Las Vegas owner to allow her to start a Camp Rhino right here in Boise.

When I first entered the facility, located off Overland and Orchard, I immediately felt a child-like sense of excitement come over me. My eyes bounced from one structural challenge to another. The building is filled with climbing walls, cargo nets, monkey bars, rings, tires, and more. Then I met Jenn, the charismatic owner of this adult-sized playground. I’d call it a gym, but that word simply doesn’t do this place justice. She explained each piece of equipment to me and covered the types of courses offered: Cross Fit, Ninja Warrior, TRX, and Obstacle Course Race Skills to name a few.

Since Camp Rhino opened in November of 2015, membership has increased rapidly as people all around the Treasure Valley look to find a fun way to reach their fitness and lifestyle goals. When I asked Jenn about the typical Camp Rhino member, she replied, “the only requirement to join is the willingness to try.”

Camp Rhino boasts a 75% attendance rate amongst members; due in large part to the way membership is structured. Jenn encourages new clients to participate in her six-week challenge before signing up for a monthly plan. “It allows people to bet against themselves instead of someone else,” Jenn explained. “I have them write a $300 check that I will tear up at the end of six weeks as long as they meet the three requirements of the program. Each participant must show up five days a week, keep a food log, and attend three nutrition challenges. I don’t consider weight loss, although that is a typical by-product. I’m interested in seeing positive lifestyle changes and a commitment to healthy behaviors.”

Members of Camp Rhino rave about their success with the program. Loren Drury has been attending since January of this year when she took on the six-week challenge. “It’s unlike any other experience I have had before,” exclaims Loren. “Coming into the gym, it doesn’t feel like I’m ‘just’ working out. It feels like I am walking into a family reunion where everyone loves and supports me every single day.”

Matt Stubbs, a member since opening day, learned about Camp Rhino at a Spartan race last year. Knowing that an obstacle course gym would support his desire to continue competing in similar events, he signed up during their grand opening. What Matt likes most about the gym is the culture. “There are people of all ages, shapes, and fitness levels, and everyone has your back. They celebrate your successes with you and help carry you through the rough spots. I know it’s cliché, but we really are a family. A big, happy, crazy family.”

Camp Rhino has certainly filled a long-standing need in the Boise area by making fitness fun and engaging. I may have finally found a good enough reason to leave the comfort of my bed at 5:00 am.