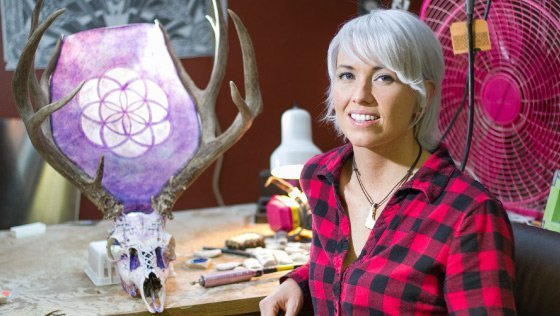 Hold a piece of Geo Handy’s art, and you might think you’ve fallen into a fairy tale world; her work is that mysterious and authentic. What’s more, you’ll be touching, literally, Idaho’s wildest realm. Handy’s medium, the shed antlers of elk, deer and moose, originates from the Frank Church River of No Return Wilderness, Idaho’s central core. Her father, Dave Handy, with the help of his trained dog, travels through the wilderness collecting the antlers that are shed each year by these wild animals. Handy’s striking art that includes pendants, rings, buckles, ornaments and hats, is cut and carved from antler. She explains that when she cuts into an antler, she doesn’t know what to expect. Antlers are quite varied in quality, and Handy says she’d like to understand what makes some antlers usable, and some not—she suspects that diet has a role. Her ideal antler is “creamy white and dense, with very little marrow.” Some antlers have a lot of marrow, making them less usable. Her favorite antler is moose, though these are less common. Antlers of animals that have been killed are unusable because blood is still circulating through the antler.

Always artistic and visionary, Handy was inspired about 7 years ago to create a gift for a friend from an antler her father had brought home. She created an image of a tree, a design that she’s well known for now. Intrigued with the medium, Handy began to explore creating more ornaments and jewelry from antler. She first used a Dremel power tool that she found at a pawnshop, ultimately burning through a few until she purchased a Foredom flex shaft, the tool she uses now. She learned to incorporate other materials into her art such as gems, crushed materials, and silver. Through trial and error, and a lot of experimentation, Handy has created a body of work that has found customers and admirers. Handy’s style ranges from delicate to bold; but each creation is signatory, elaborate, and unique. Her jewelry is often worn as signature pieces for a special occasion or event. Handy says she likes the uniqueness, the originality of her medium and what she can create from it. She says she likes to create a design, and then push the elaboration even further. Her art, she says, is “not inspired by others’, but from her heart”; there’s really nothing to compare it to, and she prefers it that way.

As Handy’s antler art evolves, she follows new designs that occur to her, exploring and expressing the concepts as fully as possible. Sometimes an idea snowballs and opens up new opportunities. For example, her colorful, varied images of the state of Idaho have sparked interest in fashioning ornaments of other states. Her artistic vision is to keep on creating here in Boise, moving into higher-end jewelry and interior design such as wall art and handles. Handy has hired an assistant for help to keep up with the demand for her designs. And she’s looking for the right setting to display and sell her work in Idaho. Walk into Handy’s workshop, and you’ll see stacks and piles of whole and cut antlers, on tables, on counters. Her medium seems unlimited; so does her artistry and future.

ABOUT US
Greenbelt Magazine aims to keep you informed about what’s happening in this great community of Boise, Idaho. Feature articles include interviews with local residents and business owners, culture, gourmet foods, recreation, real estate and local events. Readers will be consistently entertained, educated, and enlightened by each issue.
Contact us: tia@greenbeltmagazine.com
FOLLOW US
© 2020 Greenbelt Magazine. Website by Senze Digicraft
MORE STORIES