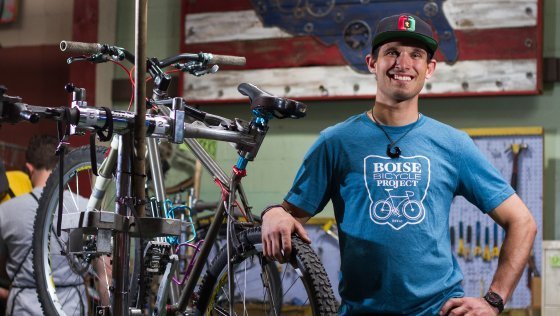 A “creator and connector” might describe an efficient networking personality, but it’s not a person we’re talking about; it’s a bicycle.

“When I first moved here, I drove,” says Boise Bicycle Project’s Cass Jones. “When people asked if I knew where things were, I might have driven past those places ten times, but never saw them. At higher speeds with multiple lanes of traffic, it’s harder to take in. A bike gives you that chance.”

Jones commuted on a single speed bike when moving to Boise to attend school, and he continued with the habit for a variety of reasons.

“You can stop whenever and wherever to take a look around. Mornings, there’s time to think, get your day going right. After work, you cool off and get back in the groove so that when you get home you won’t sit there on the couch, pondering everything. You’re already over it.”

Jones has met a large variety of cyclists.

“They’re nice, genuine, good-natured people,” he says, “They want to know where you’re from, and what your story is. There’s a slower-paced mindset, they’re not in a rush. They’re taking time, enjoying life.”

Jones says that the choosing of a bike should have some thought behind it.

“Don’t just buy any bike. Get one you’ll identify with.”

From the color to the style to the tires, bikes are conversation starters.

“When you’re out riding around, others will see your bike and identify with it. You’ll meet new people, stand around talking about it, and hear their stories, too.”

Jones gives a heads up for biking community newbies:

“A lot of us are kind of little bike nerds, geeking out over bike features, so expect to hear, ‘Oh, look at those lugs!’ We pick out weird things. People will ‘o-o-h’ and ‘a-a-h’ over bikes.”

When becoming more involved in cycling, plan to become heavily attached to an inanimate object.

“People who’ve had their bikes stolen aren’t necessarily bummed that they have to replace them,” Jones says. “They’re bummed because of the memories they’ve had on their bikes. I still have the frame from a bike I toured on.”

When gearing up, Jones is a big fan of one specific item.

“It’s crazy how much more I enjoy commuting with a rack on my bike,” he advises. “Getting the backpack off your person means you won’t arrive at your destination with a sweaty back. Strap down a coat, put a milk crate on it, whatever. There are equal arguments for both front or rear mounted racks.”

For beginners, Jones agrees, the Greenbelt can’t be beat.

“Wandering to Hyde Park through Camel’s Back, looping to the MK Nature Center, going to the Old Pen, and maybe out to the golf course to a short cut that pops you out by this sweet waterwheel. That’s a fun ride.”

Going with the Flow