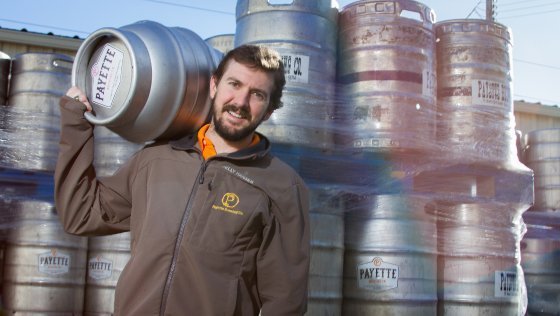 Payette Brewing is Giving Back – One Keg at a Time

Help is on tap for Treasure Valley non-profits, thanks to Michael Francis, owner of Payette Brewing Company. “Kegs4Kause is a unique, recurring event created as a means to give back to the community,” shares Ashlee Struble, of Community Events | Payette Forward. “Every Monday, Payette Brewing donates 50% of proceeds from beer sales in the tap room to the selected non-profit of the evening. Non-profits must have a current 501(c)3 status and able to show proof of designation. Non-profits are eager to apply and secure their evening of fun and fund-raising. Some of the summer Kegs4Kause recipients are: Boise School of Rock, Hearts for Hadley, and the National MS Society Utah/Southern ID Chapter.”

“Many non-profits have benefited already, but just recently we have had New Approach Idaho, Dirt Dolls, PAWS Rescue Idaho, and many more. Already this year we have donated $2,581.50 to non-profits through our Kegs4Kause program,” notes Struble.

“We have supported over 200 non-profits through our weekly Kegs4Kause Program. We take great pride in being able to support local non-profits weekly! It’s that good old warm fuzzy feeling,” she enthuses.

“Kegs4Kause technically started in August of 2011,” Struble reflects. “We were working with Radio Boise trying to come up with some ways we could help them raise money. We were tossing around ideas and thought we should have a night in the tap room to promote Radio Boise. At the time, we weren’t open on Mondays, so it seemed like a good day to do it. We decided that we would donate 50% of the proceeds from that night but asked if they could let all of their listeners know it was happening. We had some people show up that Monday wanting to support Radio Boise by drinking a beer, and the rest is history.”

Kegs4Kause is not the only way Payette Brewing Company gives to the community. Payette Forward is their charitable giving program. “We brew our Payette Forward IPA and it is put on tap mid-December each year,” states Struble. “100% of the proceeds from the sales of this IPA is then donated to the selected Idaho non-profit. Applications for our Payette Forward program open in November and non-profits are encouraged to apply. This year, the recipient of our Payette Forward Program is Usful Glassworks Inc.”

Payette Brewing Company has also benefited and received support from giving back. The brewery opened in May 2011 and is expanding; a new production facility will open in spring 2016. The 60-barrel brewhouse will have the capacity to produce approximately 100,000 barrels per year. The new downtown location will have an outdoor beer garden, new tap room, and brewery observation deck. The original 15-barrel brewhouse will focus more on specialty brews, one-offs, and barrel aging and be an R&D brewery to try new and different beers, as well as grow their barrel aging program.

The owner/brewer/founder of Payette Brewing Company is Michael Francis, a former Boeing engineer, who has an obsession with craft beer and decided to turn his hobby into a career. “The brewery is named after the Payette River and Lake,” states Francis. “While in Seattle planning a brewery, I was thinking about what I missed most about Idaho—kayaking the Payette River and spending summers on Payette Lake—it just seemed like the perfect name.”

When asked about his philosophy of life, Francis replied, “Be awesome.” Besides making some awesome brews, like the popular Rustler IPA and his personal favorite, Rodeo Rye Pale Ale, Francis is making an awesome impact on his hometown with Kegs4Kause and Payette Forward.