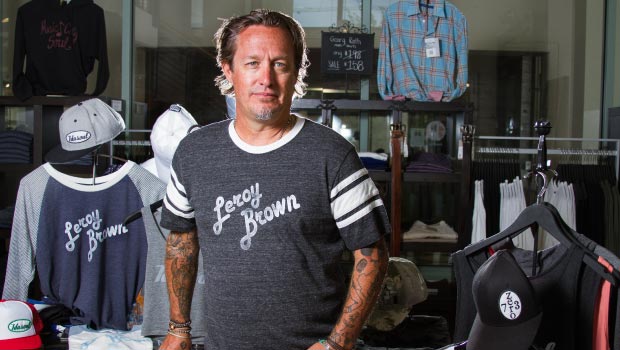 While Steve Lucas is best known for his time as a coach for Boise State’s soccer program, he is also the visionary owner of 7zero3, a lifestyle clothing line. When we sat down over coffee at Java Downtown, I knew I was going to get a chance to sneak a peek into the intriguing world of the man behind the name.

Lucas was born and grew up in Northern Virginia.  A spark fills his eyes and pride emanates as he talks about how he loved growing up there and growing up in the same house his father did.  He is grateful for his parents, who he says “let me be me.”  Lucas is vehement that one should be proud of where they come from.  He says his father was the reason behind his entry into the world of soccer—which he played through High School and was recruited into Clemson College.  In 1996, a coaching opportunity brought him to Boise, and he has stayed here ever since.

After serving as Assistant Coach for some time, he was asked to take on the role of Head Coach for the Boise State University Women’s Soccer Team.  He spent the next 12 years living and breathing soccer.  He enjoyed it, but suddenly in 2012 his life was unexpectedly altered.  He remembers the day clearly—it was a Tuesday—and he was devastated to find out his contract would not be renewed.  Lucas instinctively went into survival mode, one he says that “any coach who has been coaching for a long time” would enter.  He started immediately looking for the next coaching job, which he fortunately landed within a couple of weeks.

The new coaching position required him to start six months later.  In hindsight, maybe it was a blessing in disguise.  Those six months saw Lucas weighing his options about what he really wanted out of life.  He had come to a point in his life when he was ready to stop chasing a career, start paying attention to who he wanted to be, and have more time to be there for his family.  Out of this soul searching period was born his brain child, 7zero3.  Necessity and passion were his driving force.

The name 7zero3, represents the zip code in Northern Virginia where he grew up.  When I ask him what his inspiration was behind the 7zero3 lifestyle brand that produces contemporary clothing and apparel, he says, “I was always into clothes, art, and music culture.”  He is a die-hard fan of the band Kiss—attending his first concert when he was just 7.  Lucas is a proponent of supporting local businesses and talent, so he employs the help of people with a flair for art to put to paper what he visualizes for the clothes.  His apparel designs are exclusive, some even one of a kind, and are inspired by real people and life experiences.  Lucas invests his soul and pride in what he does.  He says, “I’m never going to put something out there that I wouldn’t wear.  I want it to mean something to the person wearing it.”  He wants his products, that he personally prints and dries himself, to be interactive.  He would love to have people wear his IdaSoul Line and snap pictures from around the world to share.  His four guiding principles are “soulful design, quality product, exceptional comfort, and meaningful interpretation.”

Steve Lucas’s IdaSoul apparel can be found in Piece Unique on the corner of 10th and Idaho.  For more information, visit the 7zero3 website at sevenzerothree.net.