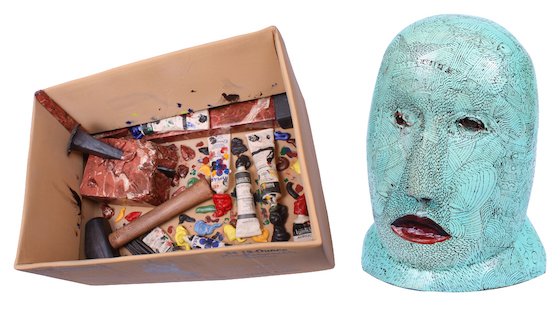 by Liza Long, photos by BAM

We’ve all heard that a picture is worth a thousand words. This September, Lacey Daley, Zack M. Evans, and Hannah Rodabaugh, three local writers with the Cabin, will demonstrate that maxim as they share literary art inspired by the Tall Tales exhibit at the Boise Art Museum.

The September reading is the second of a three-part series that pairs writers with art. Melanie Fales, executive director of the Boise Art Museum, has made collaborating with other arts organizations a priority in her eight-year tenure. “With this exhibit, it made sense for us to focus on literary art with our partner across the street,” she told me when we spoke by telephone. “The initial reading [in January 2016] was fabulous, and we’re thrilled about the project.”

Fales observed that a cross-disciplinary approach to art helps people to connect with the museum’s pieces in a new way, a view that was shared by Megan Williams, the Cabin’s events manager. “These are narrative-driven pieces,” Williams told me when I met with her and the writers at the Cabin. “Having writers express the art’s story in words creates a richer experience and invites people to imagine their own interpretations.”

The Cabin and the Boise Art Museum have a history of working together to promote their respective arts. For both Fales and Williams, that collaborative spirit is evidence of Boise’s dedication to culture in our community.

For the writers, the experience provided a variety of opportunities and challenges, as well as a way to explore their writing process.

Daley, who composed a flash fiction story, discovered a new kind of writing. “I looked at the painting for a week,” she told me. “At first, it seemed obvious that there were two characters. But as I thought about it, I realized it was a man who had lost his wife.” Daley earned her MFA in creative writing from Boise State University and now works as the digital content manager for Boise State Public Radio.

Rodabaugh, who holds an MFA in poetics and an M.A. in Literature, took a poetic approach to the project. As she looked at the turquoise enameled sculpture, she imagined a primitive human whose emotions were reflected by the designs on his face. “It was like a rough draft of a human,” she said.

She described the constraints of working with an assigned image as similar to working within the restrictions of literary form—for example, the meter, length, and rhyme requirements of a sonnet. “Form can free you as a writer and allow you to go to a place you normally wouldn’t go,” she said.

The three writers will share their work with the public and explain more about their writing process in the September 22 installment of the Tall Tales series at the Boise Art Museum. The final reading will take place in January 2017, and the exhibit is open to the public until April 2017. The art is also featured in the Boise Art Museum’s “The Whole Story” art cards.

Fales and Williams are looking forward to many future collaborations. “It’s a great way to create a conversation that enhances of our appreciation of the visual arts,” Fales said. These are the cultural conversations that create meaning in our lives.

Solving the Mystery behind JUMP!