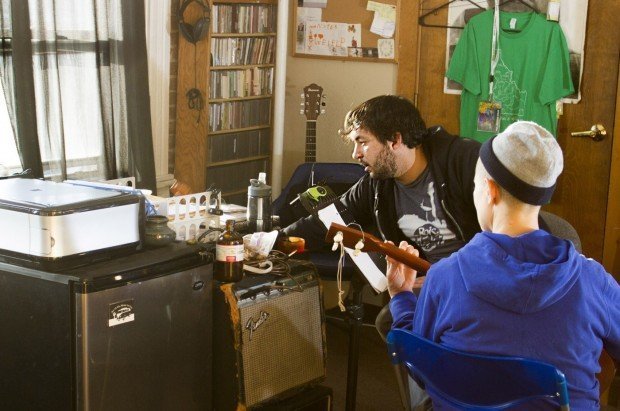 Boise troubadour Thomas Paul is a bit of musical wonder kid… Except that he’s not quite a kid any more. But chronological age aside, Paul’s musical talent and professional virtuosity have been a staple of the Boise music scene for longer than he’s willing to admit.

Paul is a veteran performer on multiple local stages. He can play nearly any string or keyboard instrument set in front of him, and he co-hosts (with Boise comedian Gabe Dunn) Radio Boise’s V3 program, which airs Fridays from 9 a.m. – noon and is described as “An eclectic mix, with a liberal dose of local this and regional that, to start your weekend off with a kick.” In his spare time, Paul sings in the Boise Master Chorale and is an instructor at both Boise Rock School and Old Boise Music Studios.

This impressive curriculum vitae is supplemented by Paul’s three self-released albums, Yours, Etc. (2005), House on Fire (2009) and Goodbye, Waterloo (2011), as well as his work as a bandleader for his own group, Thomas Paul and Friends (et. al.), and as a sideman for regional and national favorites Curtis Stigers, Nick Jaina, and Bill Coffey.

With song stylings ranging from jazz and Americana to swing, bluegrass, funk and psychedelia, this Idaho Falls native has found a niche in nearly every venue and musical lineup since moving to Boise in 1996. His diverse and eclectic styles also make his original works nearly impossible to categorize, except that they all embrace a sound that is uniquely and distinctly “Boise.”
But Thomas Paul’s love for music isn’t just limited to the stage.

Paul’s range of musical methodology has made him one of Boise’s most sought-after music instructors as well. Whether he’s group-teaching the talent at Boise Rock School or working one-on-one with the kids, teens, and adults who visit his office at Old Boise Music Studios, those lucky enough to have Thomas Paul as their musical mentor learn far more than chords and scales.

Paul’s students are also exposed to the vast array of instrumentation and genres that make up the classical and contemporary musical lexicon. A guitar student, for example, will also find his or herself plucking away on the ukulele, banjo, or mandolin. Likewise, the student’s homework is not just limited to fingering exercises and learning the tab for the song at hand, but also includes exploring tracks and artists that have influenced music history, rounding out the musician’s understanding of theory, history, and appreciation.
Right now, Thomas Paul is working closely with members of the Boise Philharmonic as he lays tracks for his fourth, yet-to-be-titled album at Garden City’s Audio Lab. He also is focusing on his students at Old Boise Music Studios. You can catch him leading the Thomas Paul Band, featuring special guest James Dean Kindle, at O’Michael’s Pub and Grill on Bogus Basin Road, Saturday, January 18 from 9 p.m. – midnight.

If you’d like more information on Thomas Paul, including music lessons at Old Boise Music Studios, visit www.oldboisemusicstudios.com, or call (208) 629-9565.

Rising to the Top With Dr. Julie Compton, PhD

Delicious! Out West Dining with HelloMeridian