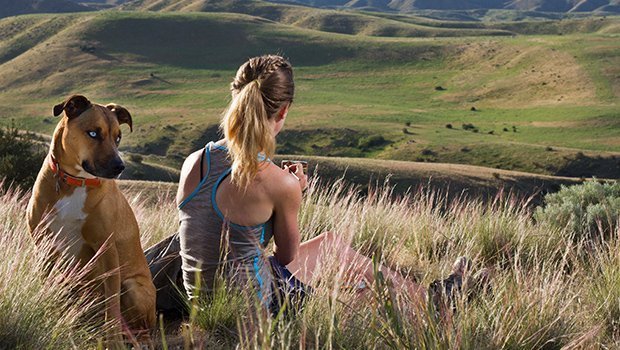 The artwork of Rachel Teannalach.

I often wonder how artists see the world. I was honored to get a glimpse of this through the eyes of local artist Rachel Teannalach. We met in her studio, a small, well-lit space with paint-speckled floors. Three large canvases stood along the wall, and her dog Blue laid in the afternoon sun, enjoying the gentle drift of the breeze into the studio. On an opposite wall, a framed picture she drew in kindergarten said, “When I grow up I want to be an artist.”

Teannalach has yearned to be an artist since she was young. She a degree in fine art and had the opportunity to study art abroad in Florence and Scotland. She moved to the Boise area in 2009, and launched herself comfortably in the artistic community that she loves to support and be a part of.

Arts have always been Teannalach’s first focus, saying, “Painting for me is a way to explore the world.” As a contemporary landscape artist, her work truly captures the essence of a place. I found her work at a show at The Modern Hotel, where she had on display over 100 3×3 canvases. Turns out these tinyExpanses are part of a daily painting practice she has continued for two years now.

Looking for a challenge that would keep her focused, she decided to paint a tiny canvas daily, no matter where she was. She started her first year of the project on October 1st, 2013, and like clockwork on September 30th of the next year she had created 365 beautiful tinyExpanses. “At the end of the year, I had no thoughts of doing a second year,” she said, but in the months following she began to miss the daily practice. On December 2nd of 2014, she started again.

Each small painting is done on site, and she does not work from pictures. She has a travel kit and a well-used metal box—smaller than a shoe box that houses one prepped canvas, her palate, a few paints, her brushes, and cleaner. The box can also be taken through security for travel so she doesn’t miss a day of painting.

How long does each expanse take? Anywhere “from 5 minutes to an hour and a half,” Teannalach says. She tries not to repeat scenes, and tries to paint during different times of the day. She loves to promote local business through her paintings as well. When she is finished, she takes a picture of the canvas with the day’s scene behind it and posts it on Facebook.

While Teannalach loves landscapes first, her theme for 2015 has been “Intersections.” This theme explores where nature meets the man-made, one example being telephone poles against a blue sky. “I’m interested in this idea of how we romanticizes man-made things and the idealized relationship man has with nature at the same time.”

With commission work, eight shows behind her already this year, and readying herself for several pop-up shows this summer around the U.S., Teannalach feels truly blessed that she has had the opportunity to support herself through her art work without having to work other jobs. Her busy life is another reason her tinyExpanses have become so endearing—it gives her time to explore her surroundings. “The most important thing for me is to make a conscious commitment to notice the world around me every day,” she says.

All I Want for Christmas