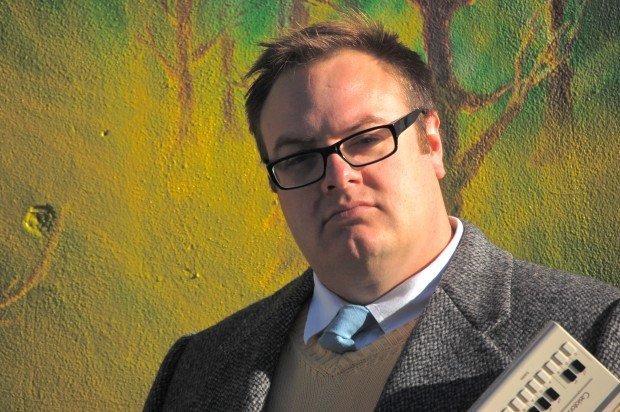 Brenton Viertel is a dangerous man.

You wouldn’t know it to look at him, but Boise’s Brenton Viertel is no one to trifle with. Thankfully, Viertel isn’t armed with weapons of mass destruction; but instead with a bow and a bass, a synthesizer (or three), and the ability to mold your children’s minds about music 180 days a year.

By day, Viertel’s mild-mannered exterior can be found teaching music for the Boise School District. By evening, Viertel is adjunct faculty at the College of Idaho and a section bassist with the Boise Philharmonic. But, when the sun sets on the City of Trees, his alter ego is unleashed in the form of Wolfgang Viertel, front man for Boise’s pseudo-German-electro-synth band, The Dirty Moogs.

Born in Wausau, Wisconsin and mostly raised in sunny Southern California, Viertel was making music before most of us can make our beds. His mother, a piano teacher, had Viertel tickling the ivories by the age of five; in the eighth grade he started playing stand-up bass and the rest, as they say, is history.

Eventually, Viertel received his bachelor’s degree in music performance from Pittsburgh’s Duquesne University and went on to receive his MFA from Youngstown State University in Ohio. From there, he worked as an intern in Nashville and taught music Virginia, before taking the Boise School District up on a job and moving west.

Six years later, Viertel is still with the Boise School District. He works as the orchestra instructor for both Trail Winds and Maple Grove Elementary Schools, as well as a co-instructor for Boise High School’s innovative new Music Technology course, along with Matt Swenson. This course, which integrates Viertel’s love of intelligent songwriting with a more modern and relevant approach to contemporary music and music production, will culminate in a student-written and student-produced album at the end of the school year.

Viertel feels honored to be a part of the Boise Philharmonic, as well. His work as a section bass player for the orchestra is a rare honor, and Viertel considers himself lucky to play with such an incredible group of musicians at that level.

And then there’s The Dirty Moogs. Along with seine besten freunde, Herr Wolfgang (Will) Gilette, Wolfgang (Peter) Thomas, and Klaus (Ryan) Donahue, Viertel’s Dirty Moogs project, which started out as a spoof project two-and-a-half years ago, has morphed into more than even the disco kings of Deutschland could have possibly imagined.

The Dirty Moogs bring to Boise the songs and pseudo-German stylings of the synthesizer for partying and traditional German electrodancings, along with special third-dimensional graphics and fantastic laser lightings. Their first album, Peter Goes to Law School, was made complete by the release of a specially produced (by Klaus Donahue) video game of the same name, and the band is currently working on their second album, Peter Gets Serious. In addition to their studio work, The Dirty Moogs have played Treefort, Ranch Fest, Tour De Fat Prefat, the Neurolux, and other random venues across the Pacific Northwest.

The Dirty Moogs will be playing at Neurolux on November 30. Find them on Facebook if you’d like to know more.

Culinary Arts for the Common Good