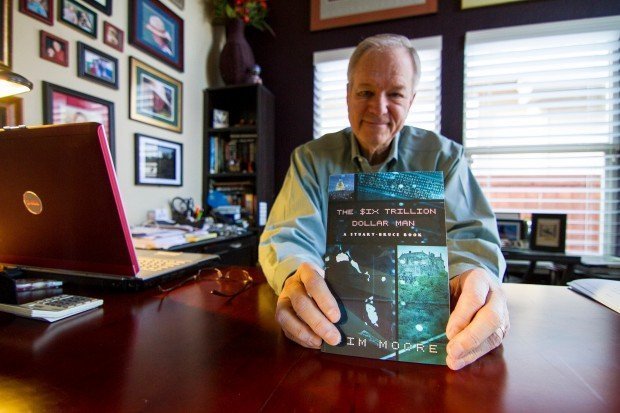 Jim Moore spans centuries and brings beautiful, small moments to page-turning fiction and promises there are many more stories to come.

What if?
How many times a day does your day-dreaming start that way? Two syllables make for one big question. These little-yet-loaded words start playful banter over the course of a lifetime. What if you won the lottery? What if Martin Luther King, Jr., was never shot? What if there was a quick cure for every disease? Big questions posit all sorts of life-changing possibilities.

Idaho’s own Jim Moore turned his big what-if notion into The Six Trillion Dollar Man, the first of The Stuart-Bruce Book Series, creating a page-turner with this: What if one person could pay off the U.S. national debt?

Yes, one gentleman and several trillion dollars. Admittedly, the money man might be a degree or two of separation from political and Hollywood fame. His noble roots make for people with straight noses, deep desires to do right with a fair amount of enticement to do otherwise and vocabulary that’s equally charming at black-tie affairs at beach parties.

And every little bit of it makes for fun fiction, something Moore says was an effort made collaboratively with editor Mary McColl and others who helped shape the plot with their knowledge.

While most spend no more than a handful of minutes answering the “What If?” question, Moore took a decade (at least) to craft a story that spans the course of centuries to make it plausible, romantic, nail-biting and thoughtful.

And what is even better is that the big, sweeping question is met with detail that paint little bits of in-the-moment color: picnics and horseback riding in ‘40s Arizona, the cinnamon smells of coffee in ‘70s Argentina, and most importantly, a conversation between an uncle and a nephew in 195s Scotland that passed on massive fiscal power.

Though the story references a multitude of cities and countries, this Idaho author gives an obligatory wink, nod and character reference (loosely based on his brother Idaho Fish and Game Director Virgil Moore and wife (as characters Virgil and Becky Robertson) to the place he calls home at the very place it should be – page 208.

Moore is taking a brief hiatus from the Stuart-Bruce series to write his next book, much of which takes place in Idaho’s Owyhee Mountains and the Frank Church Wilderness Area.

The “what if” question Moore explores this time may not feel quite so far-fetched, and it’s this: What if our nation’s leader lied about his qualifications?

Moore understands the subject matter of his books could give readers the impression that he is trying to communicate political opinions, but he says that’s far from his intent.

“I’m just trying to write stories inspired by things or events that spark my creativity,” said the incredibly affable and articulate Moore. “I really have no ulterior motives.”