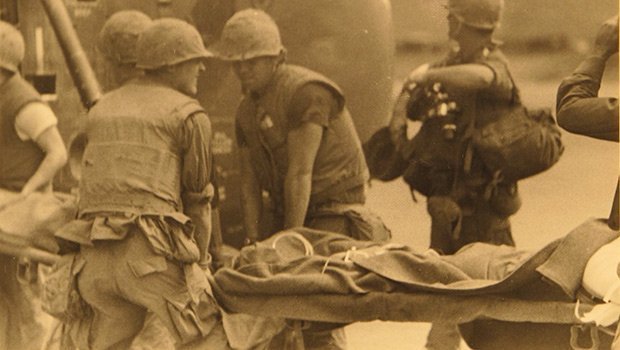 In early 1968, United States Marines at the Khe Sanh fire base were surrounded and besieged by a numerically superior North Vietnamese force.  Over the 77-day siege, the marines were under constant rocket and artillery bombardment.  All supplies and replacements were transported by air, and casualties went out the same way, even though the runway and aircraft landing on it were under constant fire. On March 30th, 1968, Bravo Company, 1st Battalion, 26th Marines, were ordered to attack enemy trench lines on the Khe Sanh perimeter.  47 years later to the day, a documentary film about Bravo Company at Khe Sanh will screen at Boise’s Egyptian Theater.  Fittingly, March 30th is also Welcome Home Vietnam Veterans Day.

March 30th is the perfect time for a special screening of “Bravo! Common Men, Uncommon Valor”, a documentary film made by Ken and Betty Rodgers about Ken’s unit during the siege at Khe Sahn and about the effects that experience had on them.  The special screening of “Bravo!” is also a fundraiser.  As Ken explains, “This March 30th event is a benefit for the Ada County Veterans Treatment Court and the Idaho Veterans Network.”

Veterans Treatment Courts are formed specifically for and exclusive to veterans. Since we require our warriors to participate in combat, we have a responsibility to see that they also have every opportunity to integrate back into our society and lead successful, productive lives. Combat causes veterans to experience trauma that often makes that integration difficult. Veterans Treatment Courts are one way we can acknowledge the fact that combat related trauma is a cost that needs to be dealt with in our society.
“Norma Jaeger is the heart and soul behind the March 30th event,” adds Betty Rodgers.  As Director of Problem Solving Courts and Community Sentencing Alternatives with the Idaho Supreme Court, Jaeger works with Veterans Courts to help veterans turn their lives around. A champion of the film, Jaeger wants to raise awareness and funds for the Veterans Treatment Courts.

“Her passion is catching hold with other community leaders throughout Idaho,” says Ken.

She is producing the event at the Egyptian in Boise and has arranged screenings of “Bravo!” in other Idaho cities with Veterans Treatment Courts including Twin Falls, Lewiston, and Caldwell.

The notable Idaho author Alan Heathcock will preside as the film event’s master of ceremonies.  After the screening of “Bravo!” on March 30th, Heathcock will moderate the panel discussion with Marine Corps Lt. Col. Ken Pipes, Ron Rees, and Steve Wiese, who are featured in “Bravo!”, as well as Idaho filmmakers Ken and Betty Rodgers. Pipes, Rees, Wiese and Rodgers are survivors of the siege where they served with Bravo Company.

To complement the screening, the Idaho Humanities Council and the Ada Community Library plan to bring author Richard Currey to Idaho as part of Boise’s 2015 Read Me Treasure Valley program. Currey penned the novel “Fatal Light” about the Vietnam War.  Also coming to Boise for the March 30th screening will be several other Idaho authors who have written books about the Vietnam War.

“We are excited about this big event and how we can help folks learn more about the Vietnam War, the personal stories of the people who served, and its long-term costs in human terms. We are also excited to be able to work with all these great Idaho folks and organizations to be able to benefit the Ada County and the Idaho Veterans Network,” says Ken Rodgers.

“Bravo!” is a visceral experience depicting some of the events of the 77 day siege of Khe Sanh.   The film has been nominated for one of the inaugural Idaho Media Awards, for which more information can be found at idahomediapro.com.

During production, Ken and Betty traveled across the United States conducting interviews.  They also traveled to George Lucas’s Skywalker Ranch in California for post-production work.  The film’s sound and film editing was done by Vietnam veteran John Nutt, who also worked on  “Apocalypse Now” and “Amadeus”, with the help of four time Oscar winner Mark Berger, who mixed the sound.

Though “Bravo!” offers a glimpse into some of the bloodiest fighting of the Vietnam War, most memorable are the stories of the men of Bravo Company.

As an article in “Stars and Stripes” states, “The film also provided some much-needed catharsis to the survivors from Bravo, many of whom opened up for the first time.  ‘I don’t think anyone else could have [made the film],’ Marine Corporal Steve Wiese, now 66, told “Stars and Stripes” from his California home. For years, he suppressed his experiences and was reluctant to tell his story. However, that changed when he sat across from the camera and Rodgers.  ‘I carry major survivor’s guilt,’ Wiese said. ‘I don’t understand why I’m alive and others aren’t. I don’t understand why I’m here.’”  In the film, Wiese describes how his unit was ambushed during a patrol and how it took him all day to retreat about 400 yards to the besieged American base.

Betty encouraged her husband Ken to make the film after they attended one of the yearly reunions for Khe Sahn Veterans.  The film stands as a testament to the men of Bravo Company, with photos, after-action reports, and never before heard audio that brings the battle to life.

Barack Obama proclaimed May 28th, 2012 through November 11th, 2025 as the Commemoration of the 50th Anniversary of the Vietnam War.  Obama writes, “We draw inspiration from the heroes who suffered unspeakably…who were wounded and still carry the scars of war, both seen and unseen.”

To order tickets for the March 30th screening visit www.egyptiantheatre.net. Doors will open at 6 P.M., and the program begins at 6:45. The film will be followed by a half hour panel discussion and Q&A session. Advance tickets are on sale for $10 for adults, or $7 for veterans, seniors, and students. On the day of the show tickets will be $10 for veterans and $15 for all others. DVDs of “Bravo!” are also available.

For more information visit bravotheproject.com. “Bravo!” also has a Facebook page, so be sure to check them out there as well.