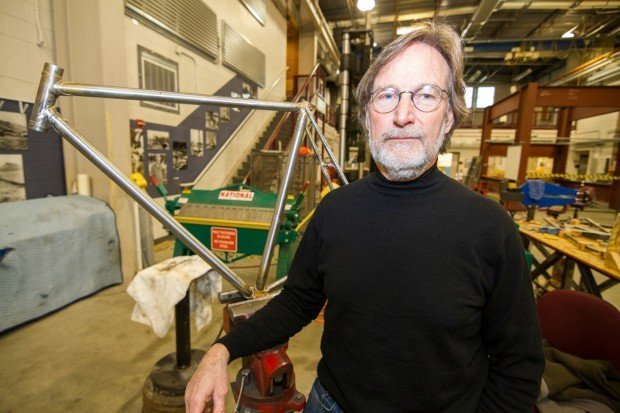 Here at Boise State University, students have the opportunity to learn just what makes a bicycle a bicycle with Professor Angus McDonald. When asked about his own bicycles, McDonald says with a laugh, “I have one that I built. I made it about 2 and ½ years ago. There’s some flaws in it and I thought that could be a problem, but it’s holding together. I think this is one of those things that is a resilient technology and can withstand people who are not very good at building things.”

McDonald is an adjunct professor with the College of Engineering. A native Boisean, McDonald received his undergraduate degree in mathematics from Boise State, followed by a Master’s in Computer Science from the University of Idaho and a Master’s of Science in Civil Engineering from UC Berkeley. When asked how this unique course came about, McDonald says, “When I quit working full-time I decided I wanted to build a bicycle—something I’d thought about all my life. So I went out on the web looking for resources to build a bicycle and found that they had classes at a number of other universities.”

His class, Bicycle Engineering, is a relatively new course at Boise State. It is in its third year now, but is only offered during the fall semester. Students learn about different aspects of a bicycle and work together as a team to construct one during the term. Bicycles are a personal passion of McDonald’s, who owns a myriad of bikes of his own.

McDonald says he owes a lot to Dr. Janet Callahan, Associate Dean of the College of Engineering and the college course evaluation committee for helping him implement this course. He is also grateful to a number of local companies that have provided materials and expertise to help make this course a success, including Boise State Cycle Learning Center, Warden Fluid Dynamics, 80/20 Inc. and George’s Cycles.

McDonald says he would like to continue evolving the course to make it better than the last, and hopes to one day have the chance to allow each student to make their own bicycle during the course. He hopes that the course will spark an interest in physics and engineering in students, areas that are less popular subjects of study. “You hear people talk about making engineering and science fun. My idea is that it is fun already. You just have to show people that it’s fun,” he says.

James Mowry, a senior general business student at Boise State, says that he was inspired to take the course because he loves bicycles. About his experience in the course, Mowry says, “It was the first time the course was taught so we had a lot of bugs we had to work out. The bike wasn’t finished that semester, but later on the professor put all the other components on it and it became a rideable bike. So I went back and rode it and it was neat.” Mowry also says that he found McDonald to be very knowledgeable and enthusiastic about the course and bicycles. He concludes with a resounding endorsement of McDonald: “He was awesome. He was very knowledgeable about bicycles. He was also very knowledgeable about engineering and the science behind how bicycles work. He’d be a go to guy for any bicycle issues.”

This seemed to be a general consensus, as during our interview a colleague asked McDonald for assistance with a gear related problem he was having on his bicycle.

Although McDonald no longer participates in as many organized bicycle events as he used to, he still rides his bike when he gets the chance. Despite its flaws, the bicycle made last year by his class hangs in his office, waiting to travel the open road.