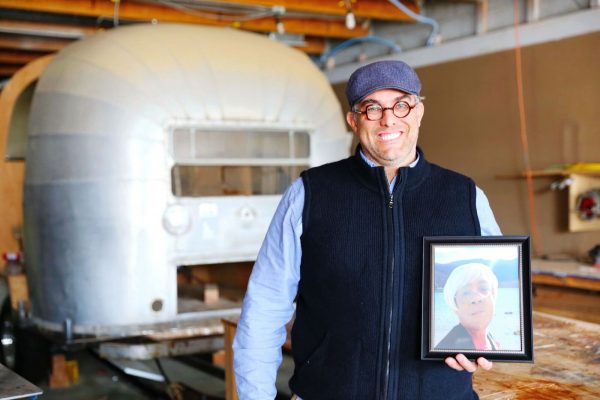 Bringing a creative dream to life

Reilly DeVie is someone who stumbled into the world of professional writing. Reilly is an artist, a welder, known for creating unique works of furniture upon request.

Several years ago, Reilly had been hanging a flyer to promote his services at a local business, Boise Blue, when he met Daniela Bronzy. She asked about his welding skills and proposed an idea she had. As someone who held a strong connection to her home, she wanted to craft a garden hoe with the unique and recognizable shape of Idaho.

Reilly’s prototypes of the Ida-hoe more than pleased Daniela, and he welded a few more which were sold up in McCall near her residence. The unique garden tool was (and still is) sold at Capital Lumber in Boise as well.

evolved into a friendship with time. Reilly began helping her with tasks around her home, chores that had become more challenging for her to manage on her own. Reilly had likened her to his grandmother and appreciated the relationship they had fostered.

About one year ago, a box was delivered to Reilly’s home. He was taken by surprise as he was not expecting a package. Inside was an incredible find—manuscripts for five children’s books with sketches and notes, as well as outlines for other stories, blueprints for various inventions, and three nearly-completed novels. Daniela penned a note to Reilly, stating “I think that you could be the one who could see these through.” Unbeknownst to Reilly and all of Daniela’s other friends, she had secretly been pursuing interests in writing historical and religious thrillers for years.

Despite the beauty of these gifts, he came to the somber realization that Daniela had left these to Reilly after her passing. She entrusted him with the responsibility of bringing her creations to life and Reilly has taken it upon himself to do just that.

Timing is everything, and for Reilly, the timing could not have been better. He had just finished a project and was able to dedicate his efforts towards preparing Daniela’s works for publishing. For the past year, he has worked with local writers who volunteered to refine the first of three novels: Roots, Rumors and Wrath.

The story focuses on the life of a Syrian refugee, who struggles with adapting to a life away from home. Reilly believes that Daniela could have tapped into her own feelings of isolation as a black woman in small-town McCall. Thankfully, she found solace in a local priest who showed compassion and company to her when she needed it. A character in the book was modeled after Father Simon, weaving another piece of Daniela’s life into the fabric of her hand-crafted works of fiction.

Daniela’s first book was self-published courtesy of Reilly, but the goal is to have the entire series picked up by a large publisher. He wants to put Daniela’s novels and children’s books in the hands of as many readers as possible, and his dedication will undoubtedly bring her works to life. Daniela’s writing ranges from self-illustrated children’s stories to mystery thrillers. She was not afraid to explore every corner of her own imaginative mind as a writer.

During the launch party of her first novel, every single copy was sold; the outpouring of support was tremendous with around 200 people attending the event. Reilly plans to follow a yearly release schedule in order to keep Daniela’s name in the public eye, rather than simply putting all of her works out at once. Within three to four years, he hopes that he will be able to share the entirety of Daniela Bronzy’s collection and build a readership who appreciates the artistry of a closet creative; someone who selflessly composed and crafted but never had the opportunity to see her work embraced by another.