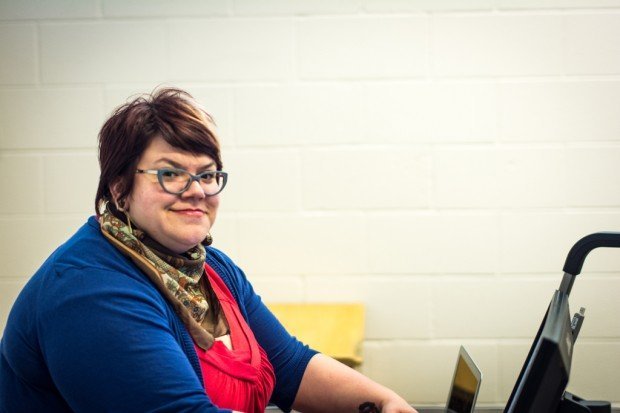 Andrea Oyarzabal is a master’s student in the English department at Boise State University. This spring, Oyarzabal will be completing her degree in rhetoric and composition and, like all graduates, is looking to the future for the next big thing.

In 2010, Oyarzabal completed her undergraduate degree in English with a writing emphasis. As an undergrad, she worked in the BSU Writing Center as a peer tutor and writing mentor to 25 students for a semester and authored a culture column for BSU’s campus newspaper, The Arbiter.

Now a graduate teaching assistant tackling English 101 and 102, Oyarzabal says she leans more toward the composition side of her major than rhetoric. The teaching opportunities BSU has offered her, coupled with tuition assistance and a living stipend, have made Oyarzabal’s academic ambitions a reality while preparing for her future goals as a college professor.

“It was hard. I didn’t realize that being a grad student [meant] having no life. I’m required to take nine credits a semester along with teaching,” she said. Often, Oyrazabal would have as many as 50 students at any given time while carrying her own coursework.

Oyarzabal’s master’s thesis covers her study of how students write traditional essays. Based on work she’s done with her mentor, Dr. Bruce Ballenger, Oyarzabal had her student’s present audio essays as part of her study. “They have 500 words to come up with some sort of creed, and then they record it for us. There’s a really interesting difference between how students write a written essay versus how they record something when they know they have an audience,” said Oyarzabal.

She defended her thesis March 11 and is in the process of revision. Once turned in, her thesis will get another revision, and then she’ll be done.

Ultimately, Oyarzabal wants to teach at the university level because she loves the setting and the students, but that will require her Ph.D.

Oyarzabal has plans to go for her doctorate, but she’s going to take a break first.

“I feel like I need to just breathe a little bit,” Oyarzabal said, “I want to watch some bad television and reconnect with my friends and my family.”

She’s applied for a job at BSU, to adjunct as an English instructor, but there aren’t many opportunities for teachers at the university level who only hold a master’s. She capitulates that at this point working at the College of Western Idaho might make more sense for her; but she says, “The market is kind of saturated for people in my field.”

Like many grads, Oyarzabal is graduating with nearly $65,000 in student debt. “I will pray for money to fall from the sky [and] look for a rich husband to pay off my student loan debt,” she joked.

But it’s been worth it. According to Oyarzabal, her education has been “an awesome experience.”

“I didn’t go to grad school to go back into retail. I had to get out of customer service because I was mean, and really bad at it. And now I’m a mean teacher,” she says with a sly grin, “But it’s fine because I’m in charge. I can be mean.”