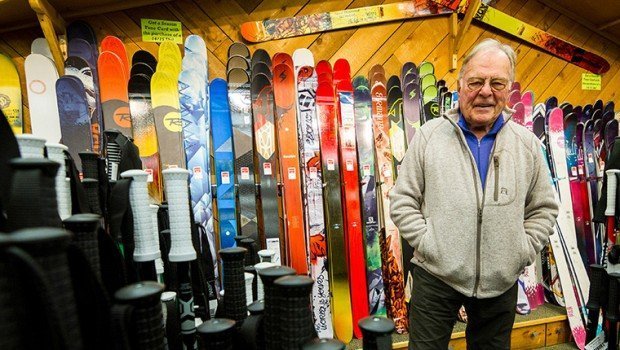 Two years before Bogus Basin’s first chairlift was installed at Deer Point, Bob Greenwood opened Bob’s Ski Haus on State Street. The year was 1957, and skiing was booming in the United States with 51 new ski lifts opening that year.

Wisconsin native Bob Greenwood moved to Boise in 1950 and quickly started skiing at Bogus. Greenwood recalls the drive up the mountain in Building Bogus Basin, by Eve Chandler. “Just driving to Bogus was an adventure. We drove on a gravel road that was just deplorable. We were driving in ruts where there were parts of cars laying around where they broke off. People would just throw parts off to one side and keep on going.”

In 1954, Greenwood was hired by Gene Gillis to teach skiing at Bogus. That same year, Greenwood and local skier Jim Brandon were featured in a 22 minute film entitled Silver Slopes of Boise that promoted the excellent skiing available at Bogus. The film was shown locally and also loaned to ski clubs in Alaska, Texas, Michigan, New York, New Jersey, and throughout the Northwest. Brandon, a member of the U.S. Army Ski Team, helped Greenwood develop a racing program for young skiers.

In the winter of 1957, 35 ski patrollers were called in to search for 14-year-old Jerry Tweedy, who was lost in the Pine Creek drainage at Bogus. On the second night out, Bob Greenwood and Emery Conner found him. “Doctors said another half hour in the elements and Tweedy might not have survived the frigid conditions,” writes Eve Chandler in Building Bogus Basin.

Greenwood witnessed Bogus Basin’s tremendous growth in the 1960’s. Ten years after Greenwood opened his store, Bogus was listed as one of the fastest growing ski areas in the western United States. In 1967, Greenwood became a member of the Board of Directors of the Bogus Basin Ski Racing Association. The association now runs the ski swap, and uses the proceeds to support area youth ski racers and promote the Bogus racing program.

Still influential as an emeritus member of Bogus Basin’s board of directors, Greenwood helped Mary Naylor start a group called the Prime Timers—for skiers 50 and better—in 1986. The group now has more than 200 participants. The Treasure Valley ski shop pioneer stated, “I wanted to get people away from skiing by themselves, because skiing by yourself isn’t a good situation. We’ve got 40 to 60 skiers every Wednesday.” Bill Reese, a Primetimer since the 1980s, observed, “Bob Greenwood is one of the best assets that Bogus has ever had. He promotes skiing, he gives of himself, he helps other people out and he has Bogus Basin at heart.”

In 1978, Greenwood moved his store from its original location off State Street into an A-frame off Bogus Basin Road. It’s a landmark anyone who skis at Bogus, so stop in next time you’re on your way up the hill.

Today Greenwood’s Ski Haus is Boise’s only ski specialty store, carrying the best brands and providing unparalleled personalized service. While he’s a little older now, Bob Greenwood is still following his passion and introducing a new generation to the slopes.

Skiing was a crucial mode of transportation before it was a recreational sport. Skis have been used in Scandinavia for more than 4,000 years.

Acting In The Treasure Valley

A Call for Cooperation, from the Frontlines of COVID-19