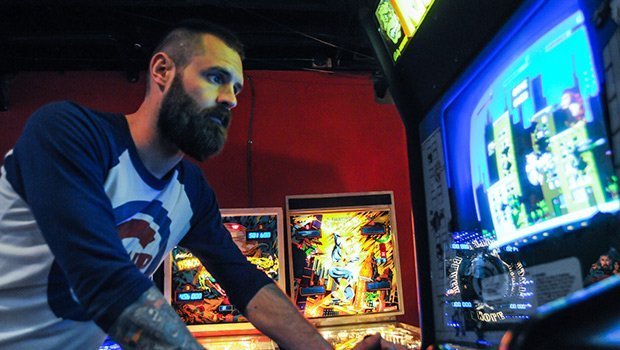 It sounds too good to be true: a place where you can play your favorite childhood video games while knocking back an adult beverage. But that’s exactly what Spacebar has to offer. “It’s equal parts bar and arcade, with a focus on the art of\everything: the art of the games, the music in the jukebox, and the beers as well. People get the ultimate nerd experience here from beer to board games to art and music,” says Will Hay, Bar Manager and Head Nerd of Spacebar, which seems like an idea right out of “The Big Bang Theory.”

Spacebar, a “barcade” located downtown on the corner of Capitol and Idaho, first opened its literally underground doors to the public in September of 2012. For ages 21 and older, you’ll find an excellent bar that features an assortment of classic arcade games from Pac-man to pinball. Hay laughs, “They called it Spacebar because it was the only name the owners could agree on. Trent McNair and the other owners were inspired by the barcades in other cities, including Ground Control in Portland, and were looking for space and found it here—hence, Spacebar.”

Currently, Spacebar has seven regular employees, each with a variety of nerdy interests. Hay grins broadly as he says, “The staff here is what makes this place what it is. They are each nerds in their own way. They each bring something different, and without them we wouldn’t be anything. I really want to give them their due—they bring the momentum and make this a great place.”

From the bar side, Spacebar offers a variety of beer on tap and in cans. For beer on tap, Pabst Blue Ribbon, that nerdiest of nerd beers, is always on, but they rotate through the other five handles. They’ve had a wide variety including IPAs, pale ales, browns, stouts, seasonal beers, and much more.

In addition to offering a wide variety of arcade games, Spacebar sells Magic the Gathering items, comic books, and wine.

While they look at establishing partnership opportunities with local foodies, for the time being they encourage outside food and have menus from local restaurants that will deliver. “What’s really great is that it’s all inclusive here. It’s not cliquish. This is a place for everyone. It’s really laid back and keeps things mellow,” says Hay.

Events are held regularly at Spacebar including private parties, tournaments, comic book releases, and live musical\ events. In March, Spacebar will be hosting its own art show called “Artcade.” Local artists have entered NES cartridges that have been transformed into pieces of art. The cartridges will be on display for the entire month as part of a silent auction. Half the proceeds will be awarded to the artist, and the other half will go to Child’s Play, a charity that provides gaming consoles to hospitals for children to use.

In April, Spacebar will also have events throughout Treefort. Check their Facebook page and website for regular event updates. “We’re excited to grow, and to see the community around us growing. You get a feeling of what nightlife around here is going to be like and we’re excited to be a piece of it,” Hay says.

For more information about Spacebar, check out their website at spacebararcade.com or do a quick search for them on Facebook.

The Opposite of Ordinary

Cinema Under the Stars