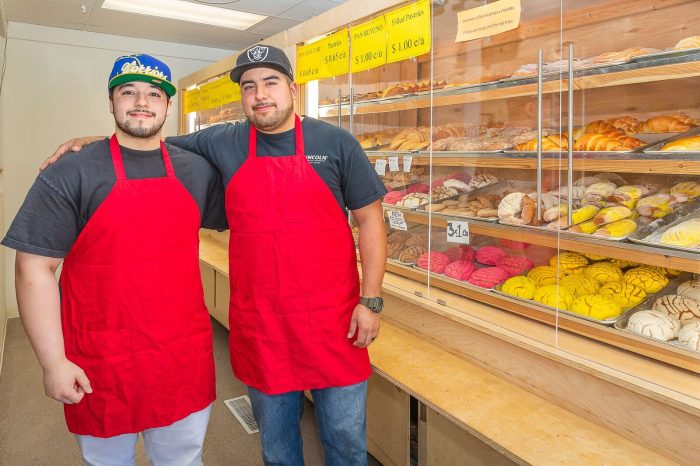 Blazing the bakery trail in Boise is newcomer, Panaderia Coalcoman. Always on the hunt for good panaderias (bread bakeries) to appease my sweet tooth, I was thrilled to find this authentic Mexican bakery, the only one of its kind in Boise. Wafts of freshly baked pan dulce, sweet bread, allure unsuspecting customers into the bakery. Found on Fairview Avenue, in a former a Los Betos restaurant, the convenience of its location draws customers from around the Treasure Valley.

With pride in his voice, Contreras Jr. values the importance of keeping the business family owned. Contreras Sr. manages the restaurant while Contreras Jr. divides his time between the two stores. His mother and brother, Celso Contreras, play crucial roles in the day to day operations. The baker, Audel ‘Lito’ Chavez, the master behind the delectable creations, is a family friend from California.

While preserving the art of baking Mexican bread, Contreras Jr. strives to pander to the taste buds of his customers. He shares his philosophy, “Listen to what your customers are saying. If it is doable, we will try to make it happen.”

Panaderia Coalcoman represents the diversity that is Boise. It attracts regular customers from a variety of cultural backgrounds and in return offers an assortment of satiating and exciting treats for everyone. Contreras Jr. observes, “When you try something from a different culture, you hesitate a little. Once people try it, a lot of them keep coming back. The nice part about Boise is that people like to try new things.”

The shelves of the bakery’s display case feature an abundance of golden and speckled sweetness. The Concha is the King of the Mexican breads. It is a sweet bread roll, topped with a sugar crust
mesmerizingly designed as its namesake, a seashell. The spread also includes muffins, galletitas (cookies), churros (fried dough pastry), cuernos (horn-shaped pastries) and novias (the “girlfriend”concha with a spiral designed topping that represents the layers of a skirt).

Going with the motto of ‘listening to the call of the customers,’ Contreras Jr. also takes orders for special event cakes. The cakes are made using the unique tresleches recipe which incorporates the use of condensed, sweet, and regular milk. With the need for more refreshing items in the sweltering months of summer approaching, he plans to add Mexican delightsto the already impressive menu board. This includes raspados (shaved ice), potato chips with chili sauce, and Mexican fruit cups which brings together the interesting combination of fruits dressed with freshly squeezed lime juice and chili powder.

Contreras Jr. reveals the secrets to his success. He shares, “The key is being the only Mexican bakery in Boise that makes the bread and sells it here. We have an established customer base. The bread is affordable with prices ranging from 65 cents to $1.50.” It was Miguel de Cervantes Saavedra, the renowned Spanish writer, who penned, “All sorrows are less with bread.”

A Shift in Perspective

On the Trail to the Future

David Wali – Skiing Mountains and Moving Them, Too