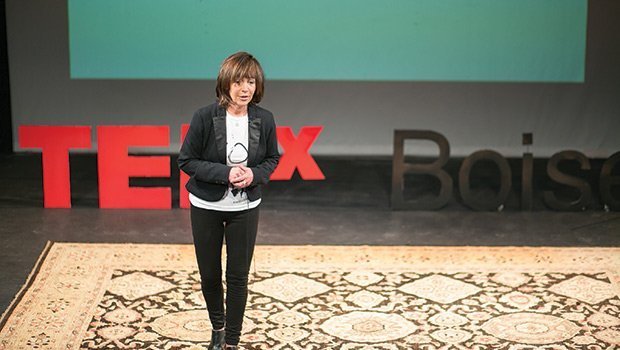 “Applause and recognition are the handmaidens of creativity.”– Nell Shipman, 1892-1970

March is Women’s History Month.  What better way to celebrate it than attending the Boise premiere of “Girl from God’s Country” on March 15th at the Egyptian Theatre beginning at 7 P.M.  Directed by Karen Day—an Eagle resident, documentary filmmaker, and former war correspondent—“Girl from God’s Country” tells the story of pioneer filmmaker Nell Shipman.  The benefit on March 15th will also help fund a grant of $1,000 for emerging filmmakers.

Long before Jennifer Lawrence starred in “Hunger Games,” Shipman was a female action heroine.  Nell Shipman was an actress, director, and writer who made films in Idaho in the 1920’s.  Shipman’s films feature storylines of self-reliant women overcoming physical challenges in the wilderness, and often rescuing the male lead to boot. Her legacy of writing, producing, and starring in nearly 70 silent films was a buried treasure in Idaho’s past until recently.  Filmmaker Karen Day discovered Nell Shipman’s story when she was doing research for a children’s book project with First Lady Lori Otter.  The first book in the series—“Ida Visits 150 Years of Idaho”—mentions that Nell Shipman was a silent filmmaker who lived by Priest Lake, with a zoo of wild animals that starred in outdoor adventures like “A Bear, a Boy and a Dog.”

“Nell’s story is important for women in film and also for Idaho, which has always been home to those who value freedom and adventure,” notes Idaho First Lady Lori Otter.

Day is as independent as her heroine Shipman once was.  Day’s home is a bright spot along Eagle Road, with a sunshine yellow exterior and boldly painted interiors.  She lives with her 9 year old son Harper, her American Eskimo dog named Yeti, three barn cats, 30 chickens, two turkeys, and two horses in what she calls her “city farm.”

“I can walk five minutes and be in the City of Eagle but still have space for horses,” she says.

As a war zone journalist, Day became painfully aware firsthand of people marginalized by conflict, especially women and children, and has made her career focusing on women’s and children’s stories.  Day says, “I can make a difference through film.  Film can travel and make an impact.”

It is fitting that the public become aware of silent filmmaker Nell Shipman at the Egyptian Theatre, which opened on April 19th, 1927.  The Egyptian still has an organ, which was played to furnish sound tracks for silent films.  A few months after the Egyptian opened, the movies underwent a revolution when “The Jazz Singer” opened on October 6th, 1927 with four talking and singing interludes.  The silent film era was soon over.

Day shares that she found some of the original sheet music used for Shipman’s films and an organ player who will entertain the audience at the March 15th screening at the Egyptian.  Memorabilia about Shipman will also be on display.

Day has some tips for aspiring filmmakers: “The subject should be so inspiring to you that you would make it for free.  You must have passion for the project to be able to raise support for the project and get it finished.  Making movies is difficult because you have to depend on other people’s skills to get it done.  It takes a village—a talented village.”

“I’m very blessed to do what I love and have the work I do make an impact.  It’s wonderful to have the freedom to do what you love.”

To learn more about Nell Shipman and her filmmaking in Idaho see “Girl in God’s Country” on March 15th at the Egyptian.  For tickets visit the Egyptian’s website at egyptiantheatre.net.

VIP tickets are available for a private reception from 5-7 P.M. with the director and crew as well as a private screening of a behind the scenes short, “Finding Nell.”  Money from those tickets will go to the new Nell grant for emerging filmmakers as well.

Go to Vime.com and search for the movie to find trailer, and you can hear Day speak more about her experiences by doing a search on YouTube for her recent TedX Boise talk.